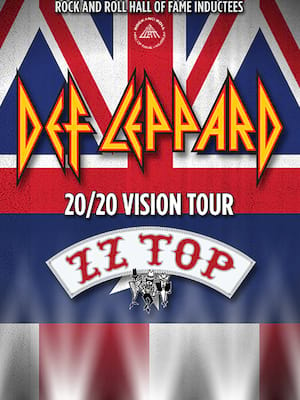 Their first four numbers are so heavy that it feels like an enormous metal anvil has fallen through the stadium.

back on the road

Titans of the 80's British Heavy-Metal revival and progenitors of contemporary Pop Metal Def Leppard have never let anything stand in their way, even their drummer Rick Allen losing an arm to a car accident. Overcoming this with a custom kit and a new style of drumming, the band surged on to create the album 'Hysteria', which hit 12 times platinum in US sales and sold over 20 million copies worldwide.

The Sheffield natives are in no danger of slowing down and continue to tour relentlessly, filling stadiums to capacity and rocking as hard as ever. Lead singer Joe Elliot has lost none of his range and his gravel-toned vocals cut through the swathes of guitar riffs and solos that bolster each smash hit of a song. Expect fist-pumping anthems, swagger and an unforgettable night!

I thought they were done but they still got it. They rocked the place,... more

Dave: “They still got it”

I saw Def tonight in Ontario Ca. Got there about 40 mins latr, had my... more

Sound good to you? Share this page on social media and let your friends know about Def Leppard at FirstOntario Centre.