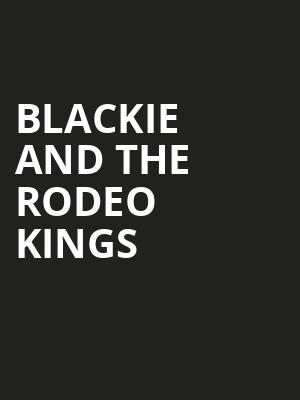 Blackie and the Rodeo Kings

Don't miss the heady Americana blues of this trio live!

Why See Blackie and the Rodeo Kings?

Blackie And The Rodeo Kings Are Back On The Road

Canada's own roots rock sons Blackie and the Rodeo Kings are hitting the road in the new year, bringing their signature blend of blues, folk and rock with them along for the ride! A veritable band for the road, for they're constantly touring, the outfit started as a one-off tribute to Canadian songwriter Willie P. Bennett in 1996. Now over two decades later you can catch the Juno Award-winning trio as they hit a stage near you this year!

Each well respected solo musicians in their own right, Tom Wilson, Stephen Fearing, and Colin Linden took their name from Bennett's 1978 album. Known for their high energy shows, the group infuse their gritty Americana with warm vocals and satisfying blues licks, pumping up the crowd throughout with their bonafide showmanship.

You may be required to have had a COVID vaccine in order to attend this performance or show proof of a negative test. Please contact the venue directly for more information on this.

About Hamilton Theatre: We are an independent show guide not a venue or show. We sell primary, discount and resale tickets and prices may be above or below face value.

View all times and dates

Sound good to you? Share this page on social media and let your friends know about Blackie and the Rodeo Kings at FirstOntario Concert Hall.